I am a plastic miniatures fan, anyone who reads my blog may of noticed. The plastic sets are getting better and better and I know some people just don't like them, but for me its a definite plus to the hobby. I will Be the first to admit when I first started painting Warlord Games Plastic Heer set I could of given up on plastics very quickly, they just didn't suite my painting style at all. So I had a rethink and changed my style slightly, not much but just enough to get better results. Now I'm sold 100% on the next generation of hard plastics.

Now on to the figures, they are cracking little figures from Perry's , easy to paint, easy to put together and price wise they beat some of the other companies hands down. So in some respects what's not to like 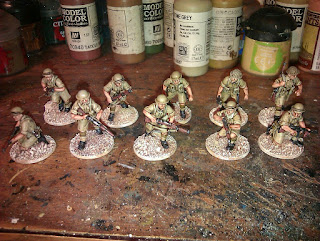 The only draw back I find with plastics is the weapons sometimes don't stand the test of time. Although on saying that the weapons on the perry figures are pretty sturdy in comparison to some. I have had issues with the plastic and metal weapons from one particular company, making weapons to scale is sometimes a bit of a home goal. They can turn out to thin and break and bend without having to use much effort, which kind of defeats the main reason most people buy them. So thats about it thanks for looking and I hope to post more real soon
Cheers Russ
Posted by Russ at 01:55