Once again WW2 has drifted into my hobby time, I picked up the warlord games German grenadiers a while back! I built a couple up but that's as far as it went. No paint was split on these little guys, until a few weeks back! Then what was a slow start slowly picked up speed. Before I knew it I had ordered myself the Waffen SS starter army, and a few bits that my wife got me for Christmas. Bless her! Apart from making me wait till Christmas for them I can't complain. 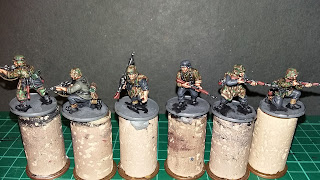 the first batch of panzer grenadiers where painting up half and half. The three I painted as SS where really a trial run on attempting the camo after a while away from painting WW2.  I wasn't a 100% happy with them but it was a start! 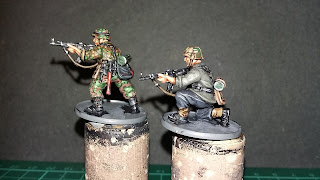 side by side two of the figures from the panzer grenadiers box painted as both Waffen SS and a Panzer grenadier. I think they worked out rather well. 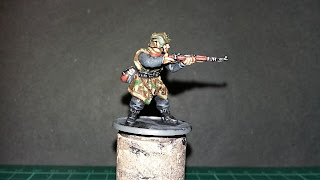 painting these certainly gave me a good go at several different styles of camo! 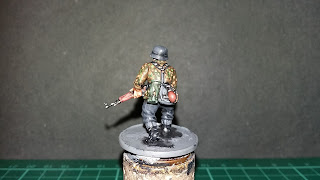 With my interest spiked I couldn't wait to get my first proper Waffen SS finished, they are not the quickest figures to paint but here they are 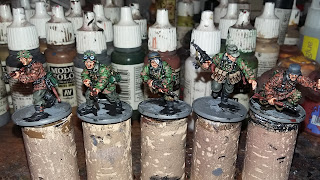 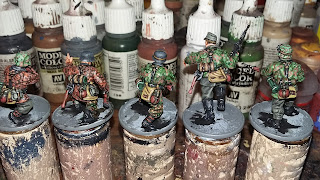 I wasn't inspired at first with the figures, I can't put my figure on it but maybe it's just me. Then out came the clippers and glue and I started to put them together! My opinion changed almost immediately, sometimes grey plastic just doesn't look inspiring. They started to look like proper Waffen SS in their smocks, at that point it seemed to click and inspiration flowed. They looked even better once the paint started to flow. So on to the mix of the figures, I think they work a treat, I've always been one for variety and this is one way to get that! 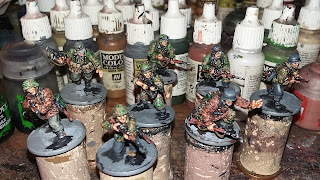 So thanks for looking guys, feel free to comment and catch you all soon again with my next posting

I've finished up my latest commission, two hellbrutes! Both nasty looking beasties for sure. I've done a minor conversion on one so his leg is raised as if he is striding forwards. I think it's worked but the proof is in the pudding so on to the pictures 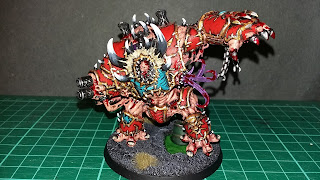 the usual liberal daubing of blood to complete the look! They are in keeping with the rest of the chaos force, classic red and gold and the accent colour of sotek green. The purple tongues work a treat and show's up the blood better than I expected 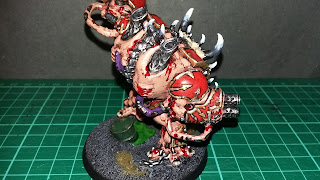 the combination of machine and flesh really hammers home the Chaos theme, the puddle of green slime leaking from the barrel adds that bit more colour to the grey rocky base. 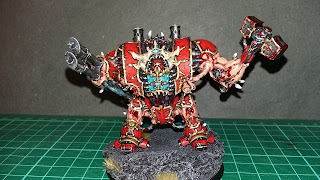 Next up the hammer, once again classic chaos! Well in my mind anyway, the huge hammer just ready to pummel its enemies into the dirt and rock. 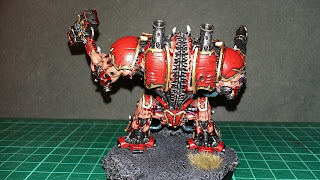 once again the combination of flesh and machine integrated! The blood pumping around its machinery pipes and veins! 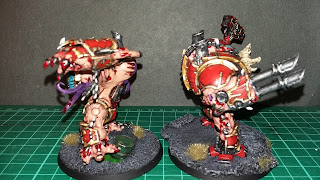 the terrible twosome back to back. 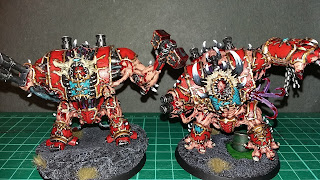 and finally side by side!

So thanks for looking guys
Feel free to comment
Cheers for now Russ
Posted by Russ at 10:09 2 comments:

My latest recruits have arrived, I'm sure they will need very little introduction the 54th Massachusetts. One of my favourite ACW films, "Glory" the story of the 54th. Great cast and pretty enjoyable watch! So on to the figures 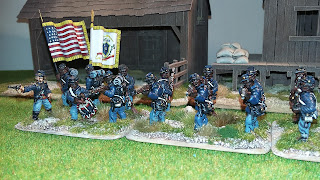 the lighting today was terrible and so was my photography, I really don't think I've done these guys justice. Between the lighting and the figures looking way to glossy I think it's a bit of a fail! 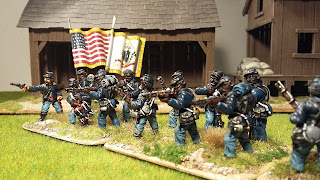 Robert Gould Shaw or my version leads the gallant 54th on the battlefield, small conversion but nothing special. The sash and the shoulder bars are greenstuff but other then that the figure seemed to fit the part really well. 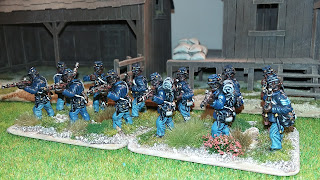 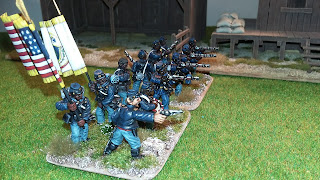 The figures are Dixon miniatures and despite a couple of greenstuff additions they are pretty much as they came! I know that's not like me but they hopefully tick the  right boxes.
So thanks for taking the time to read, and catch you all again soon
Cheers for now Russ