I've being working on these for a while now, they have being sat on my paint table patiently waiting for me to find the time to get them finished! Its very rare I solely work on a single project at any one time, it helps to keep the momentum going. They have looked slightly out of place next to space marines and various 40k chaos offerings. So onto the Boys 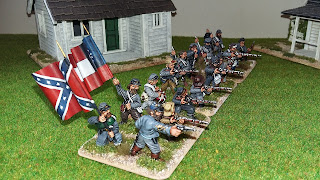 the 2nd Maryland, the boys who turned against the union despite their state coming down on the side of the union. They fought for good old Dixie 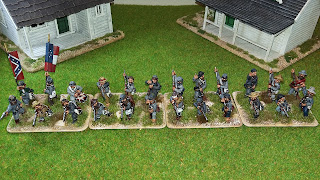 I'm no history expert so if I've got my facts wrong all I can do is apologise, of course I will add the 1st Maryland at some point soon. 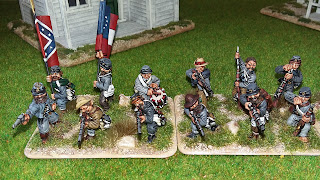 They are as always Dixon miniatures, in my opinion the best ACW figures going. No I don't get any kickback from Dixon miniatures or have any vested interest in the company! I just love the character of these figures and I can just about fluke the style when I'm converting figures. Of course if anyone wants to send me a box of goodies I wouldn't complain. Who doesn't like freebies! But I digress on with the minis 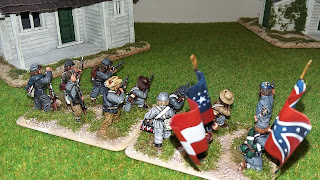 I have kept the conversions to a bear minimum for these guys, the sergeant's stripes are greenstuff and I converted him from a rock throwing infantry man. I carved the rock out of his hand and replaced his other hand from the spares box, I think it works! And last little bit of converting was adding a greenstuff sash to my officer. I'm not entirely happy with the Austrian knot on his sleeves and kepi but I had to stop before i ruined it completely. 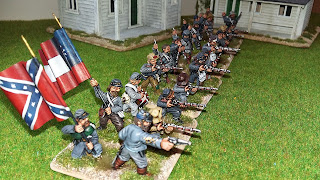 I tried to improve the basing, I'm happier then I was but I may still fine tune it. 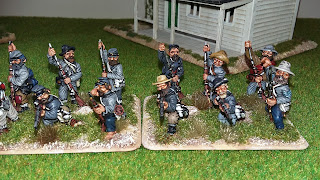 so there we have my latest additions to my Confederate forces.

I've being busy again with a little commission work, a land raider and Terminator champion. The land raider is the biggest vehicle I've ever had the pleasure to paint! It was already built and undercoated red, a couple of parts needed a little bit of attention and I also added a few bits of my own. So onto the land raider 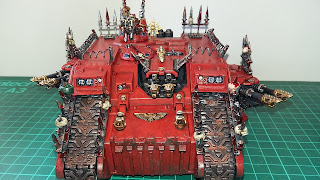 Classic red and gold to continue the colour scheme and if course the accent colour of sotek green. It's a mean piece of kit and it's covered in spikes and weapons 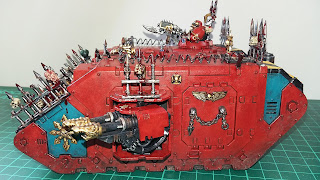 I have added a couple of bits to fill it out a bit more and to add individual character to it. 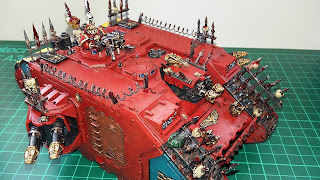 I scratch built some more railings to protect across the back and razor wire was added down each side! The railings are covered with skulls and blood! There has to be blood it's chaos after all 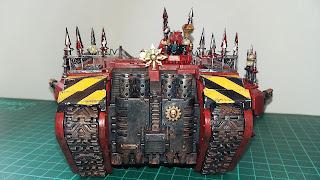 I couldn't resist painting some hazard stripes somewhere on this beastie. 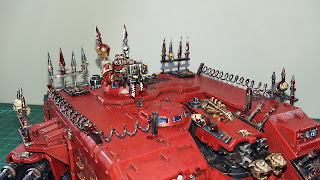 The gunner has being moved to the rear hatch, the closed hatch I removed couldn't be saved so it was a case of replacing it with a spare from my razorback. 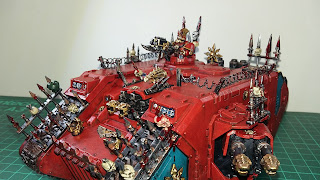 The panels where painted sotek green just to add that flash of the accent colour. 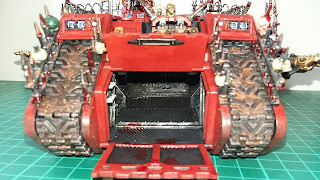 The inside was painted the best I could without opening it up like a tin can, I splattered a bit of blood around inside the hatch just to add a bit more character. 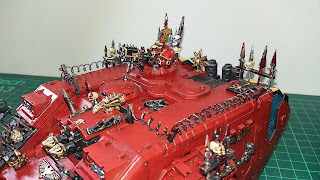 I added a bit of a rust wash over the tracks and the railings but I didn't want to over do it. I must admit I did have a few ideas before I started and most if them found a home on this beastie, even the rusted replaced door on one side.

So on to the Terminator champion, I added some detail to the base just to add a bit more character 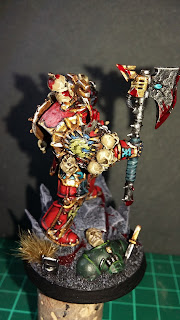 the dead marine is just spares from my bits box, the skeleton head just finished it off nicely. 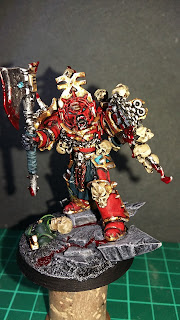 It's a cracking model to paint! It's fine cast but it actually took paint really nicely! I seem to find resin especially fine cast soaks paint up and looks slightly washed out. 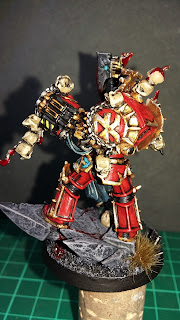 I'm pretty pleased with the end results! Time will tell if the new owner is as happy as me! So that's about it, thanks for looking.
Feel free to leave a comment
Cheers for now Russ
Posted by Russ at 09:30 7 comments: