I took the bull by the horns and finally got my Waffen SS based. It's the first time I used the dish type bases. I'm normally pretty OCD about things so mixing the new and old flat bases I thought would be a real issue! But I can honestly say it hasn't bothered me much at all. So on to the figures! 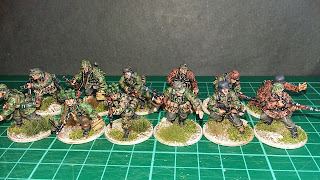 first ten up, all figures from the plastic Waffen SS box set. The mix of weapons is spot on for me, the variety always appeals to me. The more choice the better as far as I'm concerned from the choice of heads, weapons and poses is perfect for me. Least with plastic multi part figures I try not to have two figures look to similar. 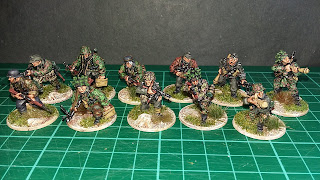 Next squad a true mix, plastic SS & panzer grenadiers, metal SS and a mix of sturmbattalion Charlemagne! They all sit nicely scale wise and the fact that the metal figures are the same size makes them even more of a win. I have in the past tried not to mix metal and plastic figures due to the very fact that they are vastly different sizes! 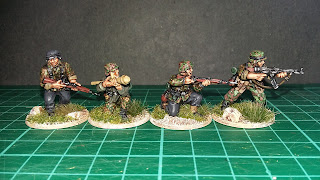 just to prove they work here are the four panzer grenadier's painted as SS, they may not be 100% accurate but for my humble collection they are good enough, after reading how much pea dot was used in the later years I wanted to mix in more pea dot uniforms. So going forward there are more panzer grenadier's to be built and painted as Waffen SS. 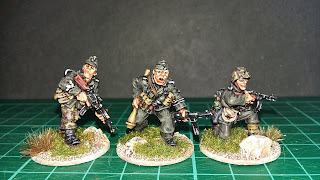 finally the figures from the sturmbattalion Charlemagne, I've got two box's of these and they are coming in very useful. The Arm insignia is easily removed with a file or craft knife so it's no real issue!

So my venture back into BA is well and truely underway, the mortar teams and a MG team are on the paint table waiting for me to grab any opportunity that comes my way!  That about rounds things off, so thank you all for looking feel free to comment and catch you all again soon!

Thanks again
Cheers for n