My latest additions to my Bolt Action Germans, I will be honest I don't think these are my best work but at least they are finished to a standard I'm almost happy with. I repainted the eyes repeatedly and the faces also took a couple of attempts on more than one of them. I have posted my tutorial for a simplified and stylized pea dot, so heres another mix of pea dot and camouflage uniforms. 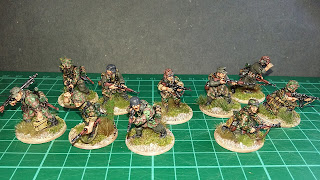 I normally avoid painting the trousers and smock in the same camou but I broke my own rules with the MG gunner. He has rolled up sleeves, the arms I borrowed from the panzer grenadiers set. They seem to work, I can only imagine it would of being hot work lugging the MG around. 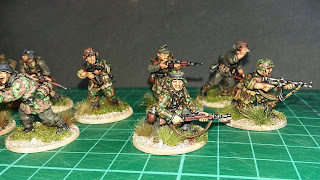 The figures are again a mix of panzergrenadiers and SS plastic sets from warlord games. They may even be parts thrown in from the Blitz krieg German plastic set, I'm a real fan of mixing the parts from different plastic sets. 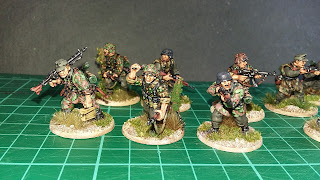 Normally I would add a few stray rocks on the bases but I decided to go for static grass and tufts. The sand mix adds enough texture to start with, so painting and highlighting does a good enough job. 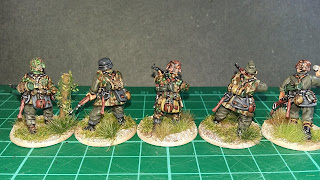 I try to add variety to the kit and equipment as much as is possible, and the detail is there to be painted. After looking at the variety of colours kit came issued in, it's a chance to add a bit more interest. 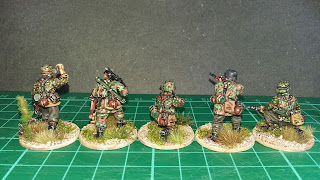 The backs of figures deserve to look as good as the fronts, hopefully I've achieved it. 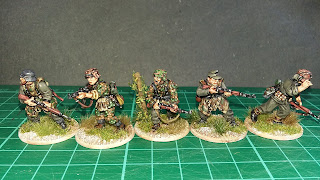 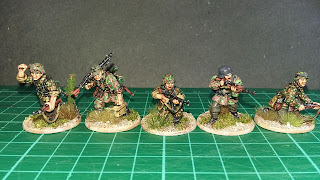 So another post added to my slowly growing blog, hopefully more will follow sooner rather than later.