I'm known for my butterfly mind when it comes to painting,  one day saxons the next Bolt Action Red Devils! So even I'm not sure what will take my interest next? I will confess to having more than one project on the go at once 90% of the time. This is where the Russian's come into it! I painted my Soviet naval brigade a while back, probably longer ago then I actually think but it sparked an idea to convert some normal Warlord Games Soviets into more naval figures. Although my plan didn't actually work out as I planned! It did getting me building some Russians. I picked up a box of the Soviet winter troops to help with another project I'm working on. So I decided to build the figures that aren't suitable for my other project into Soviets! Radical idea I know, well for me anyway.

So on to the latest recruits for my Soviets! 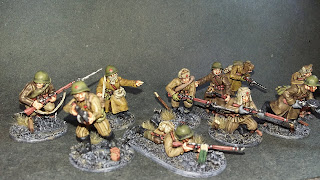 the uniforms are a mix of cold and warmer weather conditions. Anyone who as the standard box of BA plastic Soviets will know the box is a mix of the quilted and standard uniforms. 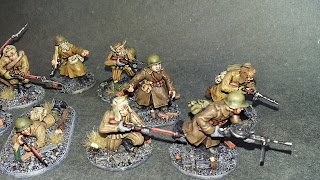 I do like both sets, and yes they mix and match perfectly! Ahhhhhh plastics you got to love um! 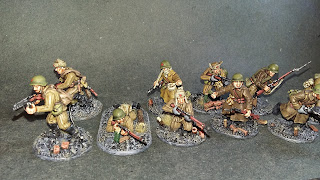 I had already started with the rubble strewn base so it made sense to carry on and make them all look the same. Besides it's quite fun making them and they sure are a nice change from my usual sand and stone bases. 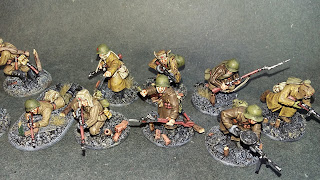 Hopefully despite the odd mix of summer and winter uniforms they still look a cohesive enough force.

These are the first of two new additions for my Soviet forces, the next will hopefully be finished in the coming week!

So thanks for visiting my Hubble blog, feel free to comment and I will hopefully be posting again real soon
Cheers for now Russ